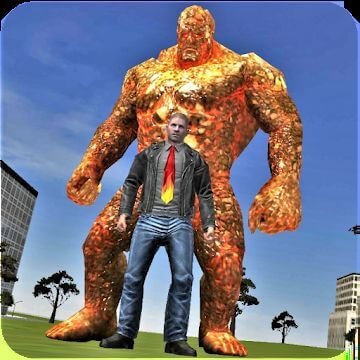 ★★★★★
Report
Stone Giant is a huge city simulation 3D game with exciting giant battles; you will be free to adventure in this city because no one can stop you.

This is an attractive action game in the third-person perspective of the character, and you will be transformed into a big guy with the power to destroy the whole city. You can freely change the character’s role in this game; becoming a savior hero or turning into a bandit is your choice.

EXPLORE THE VAST CITY AND GO ON QUESTS

You are from a very ordinary guy in this game, but suddenly, you have unlimited power and dominate everything one day. With extensive gameplay, Stone Giant will bring you a large city where you can freely control all according to your will. The player will quickly become a giant and then sweep everything into the game. You can also use weapons to attack the gangsters and steal cars along the way to participate in the races that the game offers.

UNLEASH THE POWER OF A GIANT STONEMAN

Possessing the power of a mutant, you can freely transform and create powerful attacks that scare everyone. You will get acquainted with the power hidden inside this giant stone man and discover more unique features only in this game. Take advantage of your abilities to bring out the full potential of your character through performing various controls. This city is yours, and no one can stand in your way; even those who intend to attack you with high-damage weapons are powerless before you.

FEEL FREE TO CHANGE YOUR CHARACTER’S APPEARANCE AND EQUIP WEAPONS

Stone Giant will lead you to 2 different game modes. In addition to becoming a city destroyer, you can also explore locations like a normal person. However, players need to change the character’s appearance by wearing the game’s costumes and then equipping them with weapons in case of sudden attacks. Besides, the challenges will gradually increase with each level of play, and you must complete the new tasks to unlock interesting new items.

– Experience the feeling of becoming a giant stone man wielding boundless powers and wreaking havoc on the entire city, start to role-play the character, and quickly complete the quest
– The game offers two different game modes so you can flexibly switch and explore the city in 3rd person, do everything you want, and no one can stop you
– The challenge will gradually increase after each level you complete, so players need to equip a skill, plus you will receive attractive gifts after finishing
– Besides being a giant stone man, you can also become an average person and travel the city, but you must prepare costumes and weapons not to be attacked.
– Fighting, participating in races, or experiencing the city is what you get in this game; you will certainly not be disappointed by the game’s exciting features.