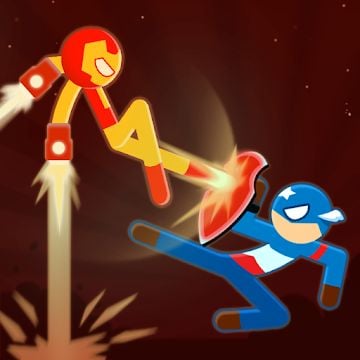 ★★★★★
Report
Stickman Fight Battle is a role-playing action game with a unique combination of action and immortal combat; players will have to play the role of the stickman to fight in wars to protect the kingdom.

If you’ve ever experienced this series of games, you can’t miss Stickman Fight Battle, one of the best fighting game series today. In this game, players will be entering several stickmen to face many kinds of powerful enemies. Similar to games of the same genre, players will be taken to a beautiful world and face many monsters and help players show their skills in using swords and knives to destroy them all.

First of all, Stickman Fight Battle is an action fighting game, where players will have to use many different tactics to face each different type of enemy. In general, the process of controlling the game is extremely simple; the player does not spend too much effort to fight the confrontation screens.

Besides, in the game, players must participate in fighting to survive in the fierce stickman arena. You will be playing the role of a stickman warrior in his hand, holding a stick sword, and using martial arts techniques to be ready to fight all enemies in the game. Really, the game always brings dramatic moments that make players hold their breath to face survival battles.

The first step into the game, players can feel the gameplay extremely fast and flexible. Stickman Fight Battle supports players who can use swords, sticks, sticks, or hands to beat each opponent one by one in head-to-head matches. The strength of the two sides is equal, and both are active in attack as well as defense. You can actively attack or block the attack depending on the situation. Players will masterly use deadly weapons to complete all missions and defeat enemies on that adventure.

The most prominent feature that the game wants to bring to players is the Stickman Fight Battle experience with 4 main game modes. Players will start with a single-player mode, a 1v1 battle mode in the first 3 decisive rounds. After passing, you will experience the fighting mode, and the enemy’s strength also increases significantly. Players will go on long adventures and discover your character’s power to traverse a variety of locations.

For tournament mode, 16 best warriors will be selected to fight against each other. If the player defeats anyone who stands in his way, he becomes the new champion. Experience the last mode is survival mode, players should prepare for a new journey, you will have to face giant bosses overcome many wars that they confront you.

THE WEAPON SYSTEM IS DIVERSE AND ALLOWS TO UPGRADE THE CHARACTER

Stickman Fight Battle provides players with a diverse weapon system. However, the player’s main weapon is still the supreme stick to fight the enemy in survival battles. However, to win this game, players need speed and superior skill. The game supports players with many weapons available to fight and the super martial arts style. Besides, players also need to dodge enemies at all costs to protect their strength. In addition, players can also use tricks and tricks to defeat the opponent in any way. To upgrade your character, players can use the gold and diamonds they collect to change their character’s appearance.

After each successful combat battle, players will have the opportunity to unlock more advanced weapons with outstanding power to face those enemies easily. At the same time, you are also allowed to collect a unique set of warriors, including extraordinary heroes. This collection process will cost players a lot of assets in exchange for those warriors.

In general, the features mentioned above have proven that this game is exciting for many entertaining gamers. The game is constantly updated with many attractive contents that will make players addicted.