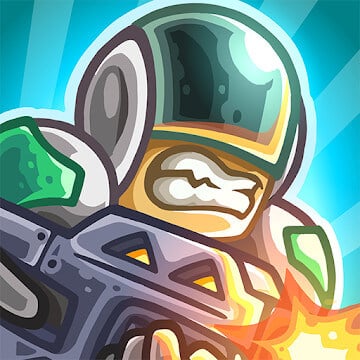 ★★★★★
Report
Iron Marines is called a real-time strategy action game. This is where dramatic matches take place on many planets in the universe. If you are looking for

Iron Marines is called a real-time strategy action game. This is where dramatic matches take place on many planets in the universe. If you are looking for action RPS games, enjoy tactical gameplay, and command a powerful army, this will be a choice not to be missed. Along with version 1.6.10, the game is always updated with outstanding features and many new special elements.

Iron Marines is set on 3 main planets in the universe. This place is being threatened by evil monsters occupying. You will have to play the role of a true commander, gathering all the brave heroes, resilient mechanics, and many other characters to fight against these monsters. In addition, the game offers a multitude of generals for you to choose from. Each champion will contain its own power and many special weapons attached.

The game offers players more than 21 campaign missions on 3 major planets, with many dangerous challenges and loads of supporting features. Specifically, the game has 17 operations to control what you need to equip before entering the match. There are more than 40 upgrades, so you can make the general and your army stronger. In addition, the game also possesses a large arsenal of weapons, ready for large-scale wars and many other features.

The highlight of this Iron Marines is also in the large number of generals, but it also contains a huge hero system, ready to wait for your command to assemble. With more than 7 main combat units, each unit possesses unique firepower and combat features for you to choose to build the strongest squad, including snipers, mechanics, sworders, and more. Gather and train them thoroughly to join the bloody battlefield and defeat all opponents.

The game also offers various challenges to increase the combat experience during the gameplay, from low-level monsters with poor combat performance to formidable bosses in epic battles. Not only stopping there, but these evil enemies also create a system of fighting machines, ready to crush your army at any time. Therefore, in addition to giving appropriate tactics, you also have to be really vigilant.

BUILD AN TEAM AND USE ADDITIONAL FEATURES

Iron Marines has straightforward gameplay. You will be taken to a new planet, use the money to gather many armies. They are all equipped with weapons and have automatic combat, so all you need to do is move them in a certain direction. After completing a quest, you will receive many useful items. Not only that, the higher the level, the more chance you have to unlock more generals and new troops.

During the battle, each champion is equipped with two main energies, including armor and destructive power. It requires you to use them following each combat purpose. Additionally, to build the ultimate RTS army, the game adds many new features, including Defensive Drones, Napalm Missiles, Ricocheting Explosions, Deadly Weapons, and many more. After winning, you will receive many new items to increase the strength of your army.

Each character’s skill in Iron Marines is not supported for a long time, but it only appears in a fixed time turn, forcing you to wait. In addition to fighting enemies, you can also collect more gold coins and screws during the game. Use it to buy the necessary items that appear in the shop. You can also use them to recruit more new heroes with modern equipment with stronger destructive power.

Not only that, but the game also owns eye-catching image quality. Although it is likely to be only graphic design in cartoon style, each character’s actions and the attack phase are also described in great detail. In addition, the influence of sound effects is equally important. With a tragic, eloquent sound throughout the playing process, it is true to its true nature. There are many other outstanding features that you will feel more about.

Iron Marines can be seen as one of the leading names in the tactical action genre. With attractive content, simple but equally attractive gameplay, along many outstanding features, it always receives many positive reviews from a large number of gamers.